Gidget was always going to be "Gidget" way
before she was born.
When Callie was mated to Marco for the first time,
it was decided
that we would keep a bitch to go on with, but she was just no
ordinary bitch - she had to be something "special".
We were very lucky indeed that dear Callie produced
9 puppies, with 5 bitches from which to choose "Gidget".

It was a very even litter, however we kept coming back to one
puppy every time.  Carol Wright from Grauhund Kennels was
invaluable to us with her assistance in helping select Gidget.
After what seemed like hours of assessing & stacking, I finally
had my Gidget.  She was a stunning puppy, with beautiful
conformation and a gorgeous head.

Gidget went on to become our first homebred Champion and she
was a Multi Class In Show & Best Headed In Show winner.
She was mated to Ch Grauhund New Man In Town (AI)
for her one and only litter of 9 puppies.
And what a litter it was !  To this day, we still use this litter as the
yardstick for our future litters, as it was to establish the type of
Weimaraner for which we strive.   Without exception, each and
every puppy could quite easily have made the show ring, but only
two were to go on to be shown and gain their titles.

Sadly, Bronson passed away after reaching
the grand age of nearly 15 years old.
He is the sire of our very successful
bitch Ch Silvasheen Indian Summer & her littermates,
Ch Silvasheen Grey Eagle ET & Ch Silvasheen Heza Rebel.
Bronson can be seen on our Bred By Us page.
And secondly, Ch Silvasheen Iced Coffee
(owned by us at Silvasheen).

Phoebe sadly, passed away at the age of 11 years old, however
we will never forget her as she was one of the most spirited
bitches we have shared our lives with (next to Skye & Callie !)
Phoebe was also a Multi Class In Show winner and produced
just one litter of 3 puppies for us.  Her daughter
(sired by Gr Ch/Am & Can Ch Divani Loads A Trouble (AI)
"Demi" (Ch Silvasheen L'Bit Dangerus) was with us until the
good age of 13 years old.

We are indebted to Gidget for her huge contribution to our
kennel. She was a real sweetheart, with a beautiful, soft
temperament and we miss her very much

Gidget pictured at left with her father Marco (Ch Lindridge Wee Jasper) at
a show in 1989 & at right at aged 12 years old. 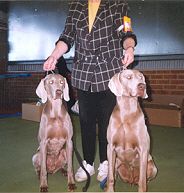 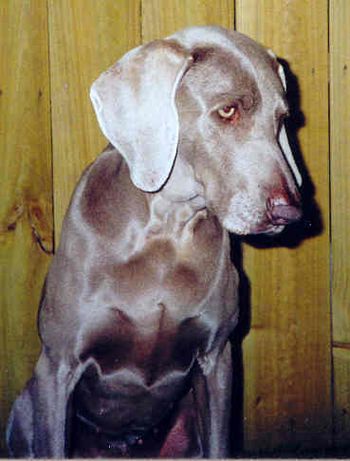 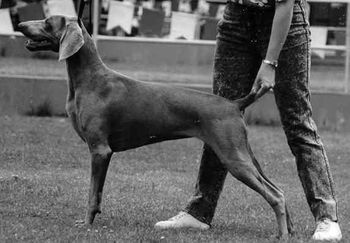